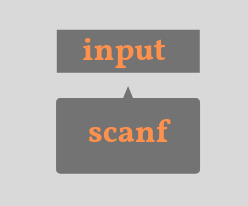 In the above C program, int is called data type and n,m,s are variables. We will discuss in detail about data type and variables in next chapter. Above Example accept two integer (whole number) value and print sum of given numbers.

We can accept more values as input in a single scanf() function.

Note : Above line of code can also write as below, in single line.